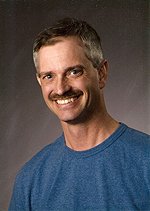 John G. Vortherms, age 49, passed away early Monday morning, January 6, 2014 at the Avera Sister James Care Center, Yankton after a 6 year battle with cancer. Funeral services will be held at 11:00 AM, Thursday, January 9, 2014 at the St. John's Lutheran Church, Yankton, with Rev. Dave Gunderson officiating. Burial of John's cremated remains will take place at a later date at the Westbrook Cemetery, Westbrook, MN. Visitations will begin at 5 PM, Wednesday, January 8, 2014 at the Opsahl-Kostel Funeral Home, Yankton with a 7:30 PM Prayer Service. Visitations will resume one hour prior to services at the church. John Gerard Vortherms was born on August 13, 1964 at Westbrook, MN to Leo and Agnes (Klein) Vortherms. After graduating from Westbrook High School in 1983, he attended Southwest State Univeristy at Marshall MN. As a jack of all trades, John worked at various jobs including: Manager with Domino's Pizza in MN, IA, SD, a driver for Cargill in Yankton, SD, a bee keeper for Honey Brandt Producers of Yankton, and finally as a yard manager at Fullerton, Yankton, SD. Given his outgoing, fun-loving nature, he was a natural as a part-time bartender at Phinney's. As a member of St. John's Lutheran Church, John found comfort and strength through his faith and church family. John married Peggy Weisser on Septerber 5, 2009 and made their home in Yankton. He was proud of his children Michael (22) and Emily (20) and loved to attend their events and activities. He enjoyed golfing, hunting, playing poker and pool. He remained true to his favorite Minnesota sports teams, the Twins, the Vikings and the Gophers. When needing to rest, he would tune in to the golf channel. In January of 2008, John was diagnosed with metastatic lung cancer, which he heroically battled until his death. He is survived by his wife Peggy (Weisser) of Yankton, SD; children: Michael and Emily of Yankton, SD, and step-daughter, Allison (Brandon) King of Vermillion, SD; parents, Leo & Agnes of Westbrook, MN; siblings: Ruth of Le Sueur, MN, Joyce of Westbrook, MN, Glen of Phoenix, AZ, Mary (Darin Hertwig) of Buffalo, MN; nieces, Kaitlin & Marissa of Phoenix AZ; mother-in-law, Lorraine Weisser of Tyndall, SD; sisters-in-law, Ileen Weisser of Vermillion, SD and Marsha (Vince) Efta of Tyndall, SD; nieces-in-law, Mallory (Dustin Slining) of Sioux Falls, SD and Jamie Efta of Tyndall, SD; his faithful dog, Puggles and a large extended family and many beloved friends. He was preceeded in death by maternal & paternal grandparents.
To send flowers to the family or plant a tree in memory of John Vortherms, please visit Tribute Store
Services for John Vortherms
There are no events scheduled. You can still show your support by sending flowers directly to the family, or planting a memorial tree in memory of John Vortherms.
Visit the Tribute Store
Share A Memory
Send Flowers