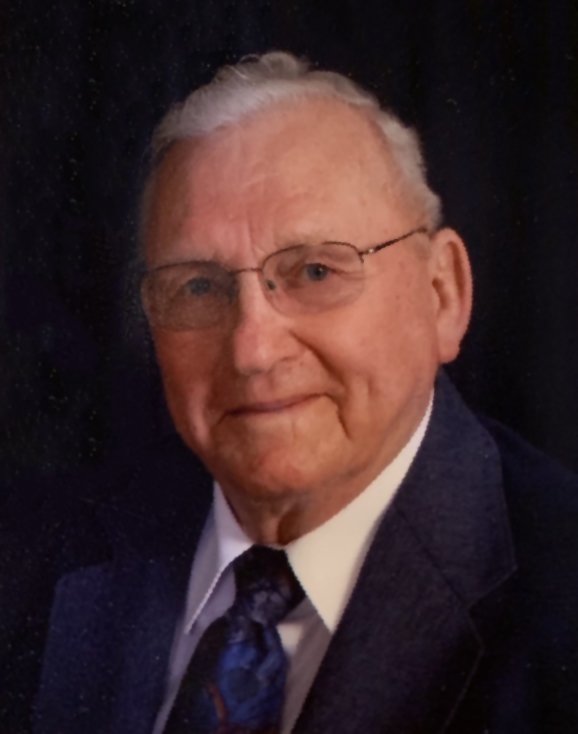 Elmer Roy Neth, age 90 of Yankton, SD passed away early Monday, April 27, 2020 at Avera Sister James Care Center in Yankton. Due to current healthcare precautions, there will be private graveside services for Elmer at Rosehill Cemetery in Scotland, SD with the Rev. Michael Hecht officiating. Arrangements are under the direction of Opsahl-Kostel Funeral Home and Crematory in Yankton. A live stream of the services can be viewed at 2:00 p.m. on Thursday, April 30, 2020 by going to https://www.facebook.com/opsahlkostel/live. Online condolences may be made at www.opsahl-kostelfuneralhome.com. Pallbearers will be his grandchildren: Katina Rueb, Kevin Neth, Craig Neth, Rebecca Rippe, Justin Neth, Kristin Tigges, Cassandra Arens, and Kellyn Neth. Honorary pallbearers will be his eighteen great-grandchildren and four great-great-grandchildren. Elmer was born April 13, 1930 at the family farm near Scotland, SD to John Jr. and Ella (Kludt) Neth. He was baptized and confirmed at the Salem Reformed Church of Menno, SD by Reverend Eric Hampchen. Elmer attended Plugraph Country School #79 in Bon Homme County through the eighth grade. When Elmer was eleven years old his father, John Jr., was struck by a bolt of lightning while farming which resulted in his passing. Following these events, Elmer’s mother married Julius Zeeb and the family relocated to a farm south of Menno, S.D. At the age of seventeen, Elmer went to work as a farmhand for Irvin Sheldon and Clarence Mogck. Elmer spoke fondly of these years and all the life lessons and agricultural knowledge he gained. Elmer met the love of his life, Dorothy Mogck, in Parkston SD. On February 11, 1951, Elmer and Dorothy were united in marriage at the United Church of Christ, Parkston, SD. To this union three sons were born: Steven, Michael, and Roger. At the age of eighteen, Elmer began farming on the homestead where he was born. Elmer worked hard to establish and preserve this homestead and other farm ground that he passed down to the fourth and fifth generation of Neth family farmers. Elmer and Dorothy farmed near Scotland SD for over 40 years until reaching retirement and enjoying town life in Scotland. Most recently, he resided in Yankton at Avera Sacred Heart Majestic Bluffs. Elmer was a hard-working man who focused his life on faith, family, and farming. When Elmer wasn’t in a field or tending livestock, he enjoyed fishing, playing cards, and camping. Many years were spent making the yearly journey with Dorothy to Mesa, AZ as RV snowbirds. Elmer was a member of the United Church of Christ, Scotland S.D. until 2009 and then a member of Salem Reformed Church, Menno, S.D. He served on the Common School Board and was a member of various church boards throughout his life. He also was a member of the Bell-Choir at Majestic Bluffs and enjoyed playing the hand bells with the choir. Left to cherish his memory are his children: Michael (Sandra) Neth of Yankton, SD and Roger (Robin) Neth of Scotland, SD; daughter-in-law, Sharon Neth of Scotland, SD; brother, Carl (Linda) Zeeb of Menno, SD; step-sister, Eleanor (Zeeb) Renner; eight grandchildren: Katina Rueb, Kevin Neth, Craig Neth, Rebecca Rippe, Justin Neth, Kristin Tigges, Cassandra Arens, and Kellyn Neth; eighteen great-grandchildren and four great-great-grandchildren. Elmer was preceded in death by his wife, Dorothy; son, Steven; parents; brother, Walter Neth; sister, Delores Quast and step-brothers, Wilmar and Emil Zeeb.
To send flowers to the family or plant a tree in memory of Elmer Neth, please visit Tribute Store
Services for Elmer Neth
There are no events scheduled. You can still show your support by sending flowers directly to the family, or planting a memorial tree in memory of Elmer Neth.
Visit the Tribute Store
Share A Memory
Send Flowers